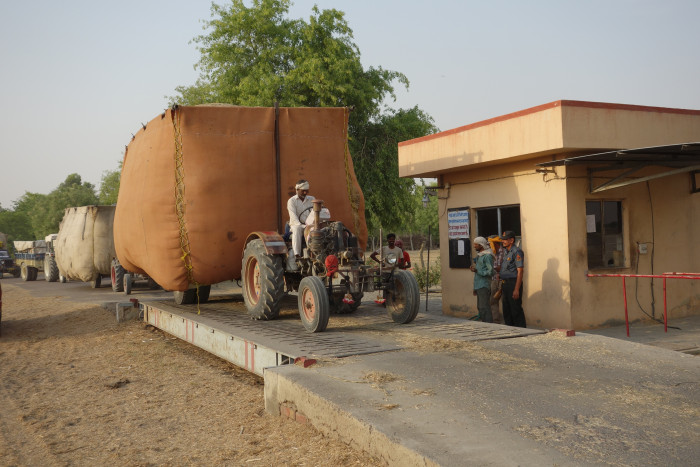 Weighing of the crops

For the 7th year in a row, AFC compensated its CO2 emissions from employees business flights (261 tons for 2019). This year, through the contribution to Atmosfair, AFC supports the Renewable energies from crop residues project in India.

The Indian state of Rajasthan is one of the poorest regions in the country, the majority of the population lives from crop and animal farming and many small-scale farmers produce barely enough to live off. In the region’s dry climate, mustard is the most important crop grown by a large number of farmers. During winter, the landscape is marked by the distinct yellow of blooming mustard. The husks and stems of the plant, which are discarded when the seeds are pressed to make oil, had long been unused residues and were burned on the fields.

The biomass power plant in Tonk uses these residues to produce clean electricity. Since 2008, thousands of small farmers have been selling their harvest residues, which had been of no value before, to the plant operator as fuel. This income is crucial to providing financial stability to many families. As farmers often do not have vehicles, collection points were set up within a 50 kilometer radius around the plant, so that farmers can bring their goods more easily. The bags of harvest residues are weighed, the farmers receive their pay immediately, and the fuel is delivered to the power plant. A large storage silo is filled to ensure that the plant has enough fuel to run the whole year, even outside of the harvest season.

This is beneficial also for the residents of the surrounding villages: The electricity which the power plant feeds into the grid is used for their energy supply. Before the plant started operation, villages suffered frequent power outages. Thanks to the power plant, electricity supply is stable now.

Atmosfair’s project partner and operator of the power plant is the Indian company Kalpaturu Power Transmission Limited (KPTL). KPTL is among the key players in planning and construction of power transmission infrastructure in India. KPTL trains and employs commercial and technical staff from the region to operate the plant. Additional jobs were created for workers in biomass storage and transport.