News from the Fruit Garden of Moldova Project 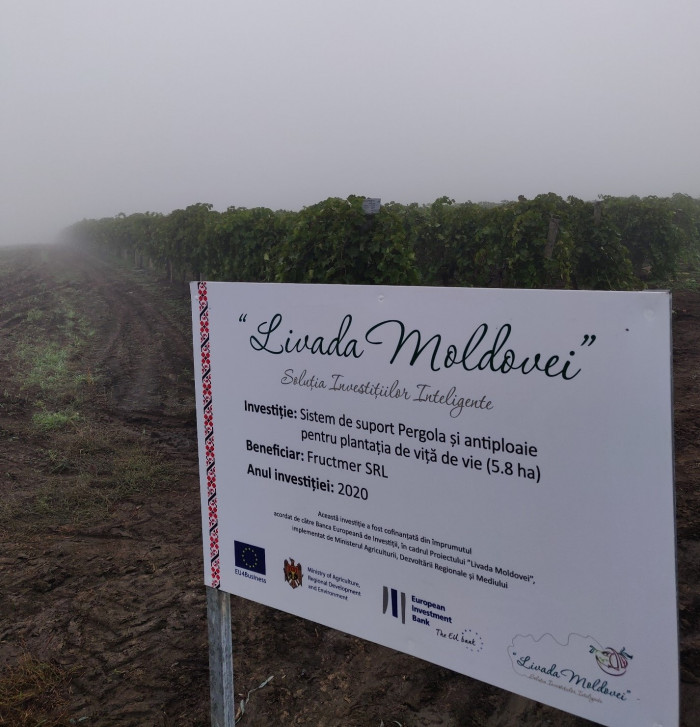 Investment into a support system for table grapes made in 2020

Since 2018, AFC has been implementing a technical assistance (TA) project (2.384m EUR) funded by the European Investment Bank (EIB) to support its operation “Fruit Garden of Moldova”. This loan operation worth up to EUR 120 million is offered by the EIB to the Government of Moldova. Via seven commercial banks, loans are extended to farms and enterprises from the Moldovan horticulture sector in order to support the modernisation process throughout the entire value chain.

Moldovan agriculture specialises in fruits, nuts and wine. The Corona crisis has not made farmers shy away from investments in these value chains. Nor has it stopped banks from lending. This is shown by the number of private sector investment projects for the 120 million EUR credit line of EIB called “Fruit Garden of Moldova” which is facilitated by the team of AFC Consultants in Moldova.

Although the overall average size of loans has been 213,000 EUR so far, more than half of the investment projects requires loan sizes of below 100,000 EUR. For this segment of the loan portfolio, the average loan size is 37,000 EUR. The majority of investments have been for fruit cold stores (about a quarter), followed by investments into horticultural machinery, support systems, irrigation and the establishment of completely new orchards.

While the number of submitted investment projects was stagnating in the first two years, the interest of farmers in this credit line and their ability to access it significantly improved when AFC entered the project with its technical assistance instruments. Despite the Corona crisis, which obviously generated some uncertainty among Moldovans, but had less than expected impact on horticulture, loans totalling over 10 million EUR were approved for as many as 45 investment projects during the first six months of 2020. This development path is expected to be maintained for the second half of 2020. The pandemic ostensibly did not affect the appetite of small and medium-sized enterprises for investments that make them more competitive. A high price for the major fruits produced in Moldova as a direct consequence of a low 2019 harvest in Europe and Russia, but also of the Corona crisis, let them appreciate the opportunities provided by horticulture. On the other hand, an extreme drought in Moldova from September 2019 to September 2020 sensitised farmers for the need to invest into irrigation. 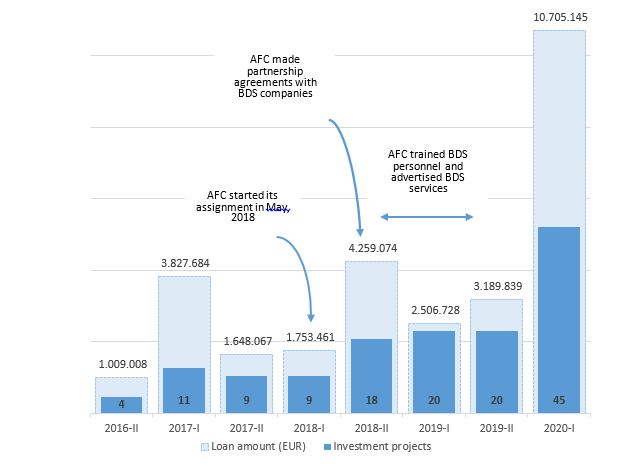 The deeper reason for the eventually improved loan absorption, however, lies in AFC’s partnership with local Business Development Support (BDS) companies who started to assist farmers and rural entrepreneurs in accessing the EIB-financed investment loans by helping them to get their financial documentation in order to, prepare loan applications in a bankable manner, present sound investment plans to the bank and advocate for beneficiaries vis-à-vis bank officers. As soon as AFC launched its activity in Moldova in May, 2018, all local business advisory organisations with at least some track record were approached. Some showed little interest, as they were used to carry out well-paid donor-funded projects. AFC, however, proposed a different arrangement, in which the BDS company was expected to invest into human capital and build up a client-base in order to reduce the per-unit costs of business advisory. In return, AFC would make an incentive payment for every successful loan application, extend training to BDS staff and include the participating BDS companies in all marketing and visibility activities: Farmer seminars in each and every rayon of the country, information stands at all branches of participating banks, TV documentaries and talk shows. The aim of this support scheme was not only to help BDS companies get promoted among SMEs and banks, but also let them create an economic base, so they could optimise their costs and offer more competitive services at lower prices.

In 2020 80% of the investment project dossiers were prepared and submitted with the help of nine BDS companies: AgriSmart, Alternative AID, BizConcept, Gateway, MEGA, OBD, ProConsulting, ProEntranse and United Solutions.

AFC’s technical assistance for the EIB credit line will end by mid-2021, and care must be taken to keep BDS for farmers running – in the interest of both farmers and the BDS companies, as investment finance from reflows will be available for many years after the closure of the credit line. Continued BDS, however, will only be possible if BDS companies manage to obtain payment from their clients for the services they render – payment which is affordable and competitive. AFC therefore intends to use the remaining time to phase down intervention with an implementation arrangement, where BDS companies shall conclude contracts with their clients and charge an advance fee for their services. After receiving the incentive payment from AFC for successful financial consulting services, they then have the opportunity to reimburse a part of the amount received as advance fee back to their clients. This is considered an important step in improving the willingness of farmers to pay for BDS services which are vital in Moldova for a sustainable financing scheme for horticulture.