Eastern Europe working hard to rid itself of the “Organic fraud” 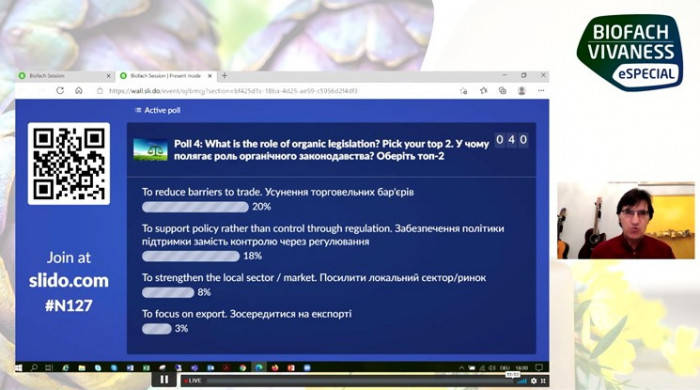 Experts and audience agree: Fraud is everywhere, and additional control measures are justified.

While Eastern Europe has had its problems with fraud in the organic sector, the rest of the world is definitely not immune to this issue. It is clear that, when stakeholders collaborate and well-focused strategies are implemented, fraud can be managed and substantially reduced. During an online session at this year’s Biofach Congress, a team of experts from around the globe, found common ground with an involved audience on the title question: “Is Eastern Europe a hotspot for organic fraud?”.

The German-Ukrainian Cooperation in Organic Agriculture (COA) project teamed up with Konrad Hauptfleisch to moderate a very fruitful discussion on this topic. They were joined by a panel of 5 experts from Central and Eastern Europe, Asia and the USA. The session was set up to not only to hear from the experts, but to also to consult an online audience of over 70 attendees through a series of polls. This approach enabled to present an interesting picture of facts and perceptions surrounding the always-topical issue of fraud.

Amongst the panellists were two representatives of certification bodies (Samanta Rosi Belliere of ICEA Italy and Sergiy Galashevskiy of Organic Standard Ukraine), an independent organic consultant (Miles McEvoy), as well as two experts from other BMEL funded projects (Jasurbek Rustamov from the Agricultural Policy Dialogue in Kazakhstan and Richard Moddy from Agritrade Ukraine).

The audience followed the interview and actively engaged by voting different SLIDO-polls regarding specific question, for example regarding solutions for limiting fraud or the role of legislation. 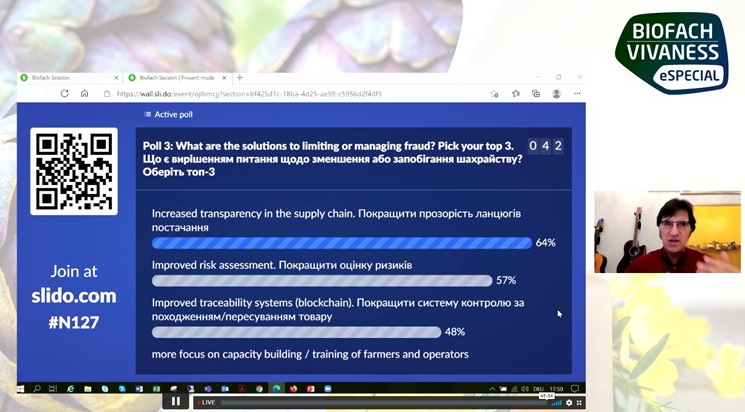 COA team leader Elisabeth Ruegg, summarised the output of the four podium sessions. It has to be understood that the EU remains the second largest market for organic products after the USA. Together, they constitute 80% of the global market, and their trade requirements will continue to influence other standards, control systems, and as a result, the development of the global organic sector.

A recording of the session in Ukrainian language is available here.